The brutal sacking of Savid Javid as the Chancellor of the Exchequer highlights the power that resides with the Prime Minister’s special adviser Dominic Cummings.

He had already crossed swords with Javid when he sacked one of his treasury advisers, Sonia Khan, and had her unceremoniously escorted out of the building by police officers.  And as if to underline the move the media were well placed to observe this and report on the power struggle within the top of the Tory government. However it looks like this might come back to haunt him according to this report in the Guardian.

It was clear that although Javid thought he may have had a good working relationship with Boris Johnson, he clearly wasn’t liked by Cummings.  This was underlined by Cummings referring to him as ‘Chino’ – Chancellor In Name Only! 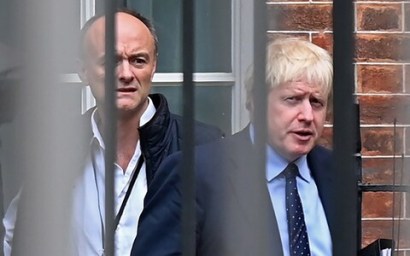 Cummings was hired as Boris Johnson’s special adviser but it seems he is the real power behind no.10; wandering in whenever it suits him, making diktats and bullying his way through cabinet ministers and civil servants alike.  Fresh from his ‘victory’ leading the Vote Leave campaign – with all the lies, smears and disinformation that drove that campaign, Cummings was quickly installed as the main player behind (or driving) Johnson.  Despite breaking electoral spending laws and being held in contempt of Parliament, Boris Johnson simply didn’t care what others thought of Cummings being appointed his special adviser.  With previous stints as an adviser to both Iain Duncan Smith and Michael Gove, Cummings was well aware of the how the Conservative party worked.

On the day of the cabinet reshuffle Javid walked into 10 Downing Street believing his position was secure as Chancellor, it was but only if he became the puppet of no.10 – and Cummings.  Given the option of sacking all his advisers and being seen as a mere figurehead (or Chino) at the Treasury, Javid decided enough was enough and resigned.  It was a classic piece of political manoeuvrings by Cummings getting himself rid of a Chancellor by totally undermining his position and credibility.  However it also places a huge question mark on the incoming Chancellor – everyone now knows that it’s No.10 (and Cummings) who control the Treasury.