… nope, sorry I haven’t got anything! 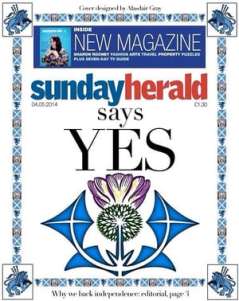 However, something has changed within the Sunday Herald.

Their main investigative reporter has been producing attacks on SNP politicians that the Scotsman would be proud of and the coverage of the Indy March in Glasgow really was the last straw for many.  How anyone – let alone experienced journalists – could print the photograph appearing to show equal numbers of Brit Nats and Indy marchers (along with the caption claiming there were ‘ugly confrontations’) and not expect complaints is beyond me.  The Sunday Herald 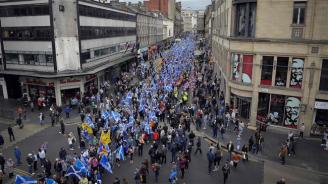 wilfully misrepresented the indy march for reasons known only to themselves.  The following week’s diatribe only added fuel to the fire of discontentment with the paper.

Then to make matters even worse, its news editor decided that it was okay for her to ‘out’ an MP’s partner and then follow this up with a pathetic ‘apology’ which was nothing of the sort.  Of course, the said news editor is now claiming that she is the victim of online attacks – again – despite showing no regard whatsoever for the person she outed.

It seems the Sunday Herald is drifting further and further away from its support of Scottish Independence, it’s definitely doing what it can to piss off as many independence supporters as possible.  If they lose readers (and they will from the independence side) then they have no one to blame but themselves.

In the meantime I’ll be relying on the National, the excellent iScot magazine and all the usual online sources from Peter Bell to Wings over Scotland.  Below are links to both Peter Bell’s and Wings’ interpretation of the Sunday Herald’s recent actions.