Well, almost.  The former crew of the sadly defunct Rock Radio (96FM) have started test broadcasts online and on the Tune-In app, giving everyone a flavour of what to expect.

There has been a long wait for Tom Russell, Ted Rock and Billy Rankin and co. to get back on air since winning the contest to broadcast again on the 96.3FM signal which fell vacant a few years ago.  Don’t get me wrong Team Rock (when it worked) was good, Planet Rock is good (apart from their decision to downgrade their DAB signal meaning I now have to use internet radio to listen to them) but neither of these stations are a patch on the old Rock Radio station. 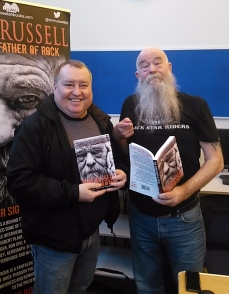 None of these other stations could compete with Tom Russell’s tales of bands and musicians he’s interviewed, with Billy Rankin’s obsession for playing Manowar and with anything that the highly unpredictable but extremely hilarious Ted Rock could come up with.  This is great news not only for fans of Rock music across Scotland but also for Tom, who’s just about ran out of libraries to visit to flog his book!

With the old crew back together the new Rock Radio Scotland is hoping to start broadcasting early in the new year and are teasing us with their test transmissions just now.  Welcome back guys – it been a long wait but it will definitely be worth it.