While looking for some ideas for the title of this blog I came across a website promoting a game called Rhetoric – the public speaking game. 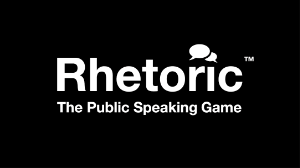 I’ve been interested in public speaking and the use of rhetoric for quite a while and thought I’d give the app version of the game a try. So, the other night myself and ‘she who must be obeyed’ went through a two player game to see how it works and if it does live up to the boast that this game can help people with their public speaking skills.

To be fair it won’t let you write a better speech as the game is focussed on quick responses with the option of delivering either a one minute or two-minute speech. The topic or style of the speech is determined by the roll of a dice and which square you land on. It focuses players to think fast and to simply get on with delivering a speech in front of other players. It aims to boost the confidence of those speaking by giving them practice in a more social game setting rather than following any strict rules of public speaking. In this way I could see that it could help encourage people to think about how to deliver a quick speech and, through practice, give them confidence to speak out.

I suppose the best trial of this game would be with larger numbers and with people who aren’t used to public speaking at all, or preferably with those who have a fear of such speaking. In this case I think this game could be a good training tool. I know that the political party I represent as a local authority councillor used to have a one minute speech session as part of the training and assessment process for prospective councillors. The aim of this was to see if such candidates could speak off the cuff on a number of issues, the content of the speech was never that important, it was more about the manner in which any speech was given. I believe a few games of Rhetoric would be the perfect training session for candidates undergoing this, or any similar, training and assessment process.

However, when it comes to training for public speaking, the best training I’ve ever had was from a local speakers club (Renfrew Speakers Club). This club organised training for one of the community councils I attend and I took part in their 6-week long training course. Not only did it help to improve my delivery of my speeches but I believe it also helped me draft better speeches that I was writing for others.  The main advantage that I saw with other members who took part in this training was increased confidence and a better ability of expressing their ideas and thoughts. I think most people – especially those who have to deliver speeches on a regular basis – would benefit from such training.  The Association of Speakers Clubs are based across the UK and offer such guidance and training.

Obviously a game wouldn’t be able to provide such in-depth training or advice but it does encourage players to speak out and get used to not just speaking in front of others but assessing how the other players speak.  I can see it be a useful tool for building up confidence and, who knows, maybe get people joining their local speakers clubs?